Spring is in full swing on the East Coast of United States, and a new product release line is blooming here at Zoomdata. Over the last month, we have released a new Long Term Supported (LTS) release and started on a new line of rapid releases to build the next set of Zoomdata functionality. Here is a reminder about the use of LTS vs. rapid releases.

Zoomdata customers still on the previous LTS release (v2.5) have a lot to look forward to in this new LTS release (v2.6) available as of April 2018. We have made considerable advances in the areas of analytical usefulness and architectural excellence. Here are the significant highlights:

A cornerstone for data exploration is the ability for an analyst to create new fields and measures from existing columns in their data. These could be semantic entities that are persisted for repeated use, or a one-off purpose-driven calculation at the row level in the data source. Zoomdata users can now create derived fields and perform record level operations with their data residing in ElasticSearch, HDFS, Hive on Tez & LLAP, Impala, MemSQL, MySQL, Oracle, Postgres, S3, SAP HANA, SparkSQL, SQL Server and files uploaded into Zoomdata. Over 50 functions are supported using native dialects to provide a rich set of analytical capability tailored for each data source. Support for more sources and functions will be added soon.

Data analysts love having many different views of data simultaneously on the screen to detect patterns and spot insights. The density with which this data can be packed plays a very important part in its usability. Zoomdata has made significant optimizations in the use of screen real estate - allowing for smaller charts and optimizing white space throughout the dashboard. Most notable is a new responsive layout of chart elements which smartly resizes and hides controls at smaller chart sizes in order to always give prominence to the data being visualized. Here is an example dashboard densely packing several kinds of visualizations without compromising readability of the data. 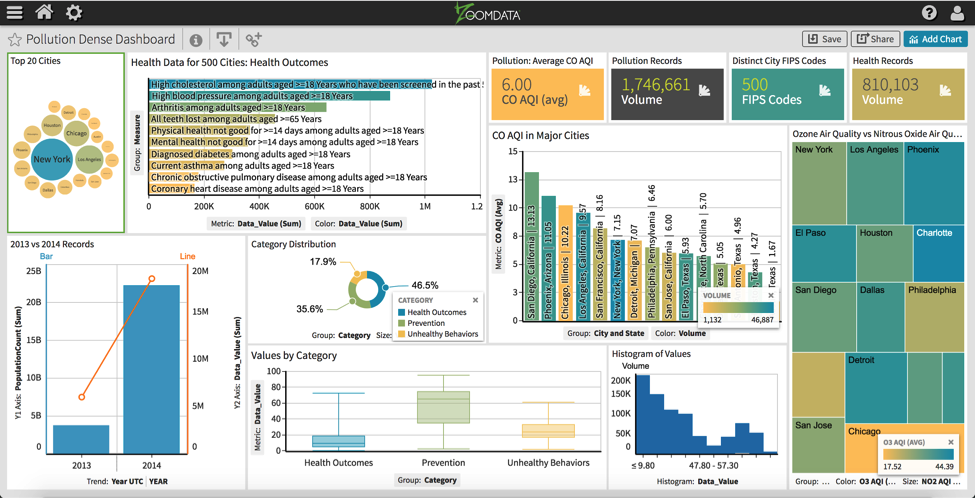 Keysets is a brand new Zoomdata feature available for preview. With this feature, data explorers can significantly expand on complex use cases where data exploration requires working with multiple data sources. Imagine use cases, such as in healthcare, where a hospital wants to analyze readmission rates for a cohort of patients who were in the same drug trial, and where readmission rates and drug trial data sets are stored separately (perhaps one in a SQL database with a structured format and the other in a distributed search-based store with semi-structured format). Analysts can now create a set of keys using the result of one chart and apply those keys in charts and dashboards that use data from the same or a completely different data source. Rather than requiring sophisticated SQL, custom code or data movement, regular users can work independently to perform deep analysis on disparate data.

In this LTS release, we were happy to do away with a few prior restrictions on group level analysis, that were in place since some data sources were yet to support such capability. These include the ability to add group level filters (for you SQL aficionados, think Having clause) to restrict data returned in a visualization only for those groups that satisfied a particular condition. In addition to this, you can now unconditionally group by numeric fields in your data, and also group by multiple time fields for any multi-group analysis.

Default number formatting can now be defined in the data source. This allows for greater control over precision (number of decimal places), numeric units such as percent and currency, and negative numbers. Numerical settings now also adapt to the user’s regional locale.

Pick lists for selecting fields in version 2.6 include a Search box, allowing users to quickly identify the field they want to use, or to narrow a long list of fields to a subset of related fields that are named using common prefixes, such as “customer.”

Previously, the Zoomdata Query Engine was bundled with other components in the Zoomdata server. Query engine is now deployed as a stand-alone microservice, and by default includes an embedded Spark server. For even greater distributed computing power and scale, the Query Engine can be deployed to use an externalized Spark on Yarn configuration on Cloudera or Hortonworks clusters.

Version 2.6 enhances our built-in streaming architecture to better support visualization and analysis of live data in near-real-time. Combined with the existing Live Mode feature, customers can keep charts and dashboards up-to-date without having to invest in sophisticated back-end infrastructure. To automatically ingest streaming data, simply define a data source using the Upload API connector. Zoomdata will generate a REST endpoint to which you can point your data stream. It’s as easy as that!

Included in this LTS release is the ability to aggregate logs from various components of Zoomdata via the FluentD unified logging layer. This enables administrators to customize storage of Zoomdata's logs in any of FluentD supported data stores, depending on the needs of your environment.

Unified logging does not replace the default logging architecture, however it augments that experience with an option for those wanting additional logging control. By default, unified logging is disabled and needs to be enabled for each component as desired.

For these and other enhancements too numerous to mention, refer to the release notes for the entire set of changes in the new LTS release.

While you all get to enjoy the fruits of our labor over the last 6-9 months, the Zoomdata product and engineering team have already begun planting features for a new line of rapid releases with even more exploratory powers for the modern data analyst, and enterprise capabilities for system administrators. More on this in a follow on blog.