Big data is a big world--and the keys to that world are data visualization and data analytics. It holds the key to innovation and competitive differentiation for companies large and small. We built Zoomdata to enable the broadest range of users to explore the big data analytics world. Robust enough for data scientists and business analysts, Zoomdata can empower knowledge workers with analytics at every level of an organization.

“Big data discovery is the next level of self-service analytics that business users will leverage to explore big data sources without support from a data scientist.”

Zoomdata supports a wide spectrum of data visualization -- from exploratory data analysis and dashboarding to embedded visual analytics. Exploratory data analysis helps users navigate and learn about data without a specific question in mind, formulate hypotheses, and discover what story the data can tell us. Dashboarding frames and communicates operational insight. And any application supporting a business process can be enhanced with embedded visual analytics.

Zoomdata’s self-service, interactive visualization engine drives the entire spectrum -- with no waiting for IT.

The Problem with Yesterday’s BI Tools

Most of today's business intelligence (BI) tools evolved in a world dominated by relational databases and CSV files. So they're not suited to modern data architectures and data stores such as Hadoop, NoSQL, and MongoDB. They were not designed for visualizing large volumes of data and unstructured or streaming data.

Querying modern data sources as if they were relational tables results in slow performance and limited functionality. As data volumes grow, these problems worsen because traditional tools don't scale well.

Many legacy BI vendors have tried to retrofit their tools to accommodate big data scale and complexity but the results have been underwhelming. This forces IT into all kinds of workarounds -- like creating mini data warehouses -- to try to satisfy business users who want to analyze the freshest, most comprehensive data available.

Zoomdata is a high-performance, modern BI and big data analytics tool built for today’s world of modern data, spanning real-world use cases that generate millions of transactions or hundreds of billions of observations. 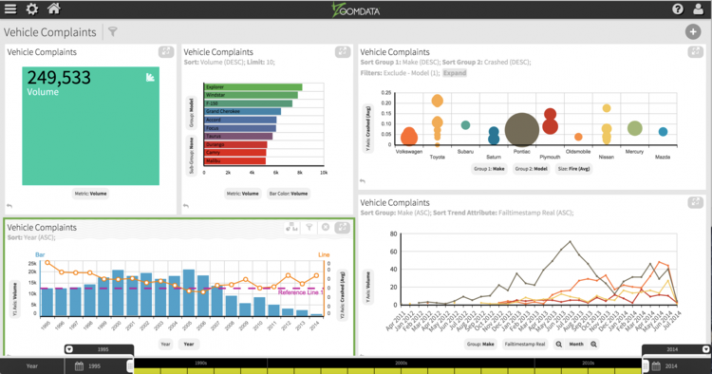 The way to learn the most from data exploration is to shape and interact with data in real time. Zoomdata interactive visualizations shorten the learning curve from data to insight.

Dashboards provide a means for sharing the insights of big data discovery and monitoring those insights on a repeatable basis. Zoomdata users can easily create dashboards combining multiple data sources and share them with the rest of the enterprise.

The world of business moves too fast for decision makers to wait for someone else to analyze data that is essential for strategic and tactical planning. Zoomdata makes self-service analytics available to everyone.

Most BI technologies are tools or workbenches that require extensive training before users can perform even rudimentary analysis. Not Zoomdata. We’ve put the user first in designing our interface.

What is Big Data Analytics?

We hear a lot about large enterprises using big data, but plenty of small and mid-sized business are climbing on the big data bandwagon. That's because even small businesses generate a surprising amount of data and the technology to analyze it is a sound investment that often pays for itself many times over.

Consider the example of Slice, a startup that has built a network for local pizzerias that want to add online order and delivery options. Slice provides network members with access to transaction and location data to optimize sales and enhance customer loyalty.

A History of Big Data Analytics

From Transactions and Interactions to Observations

Transactions -- In the 1980s and 90s relational database management systems were built for storing and accessing tens of millions transactions consisting of structured data such as product, geography, time, and amount.

Observations -- The past decade has seen another quantum shift in emerging modern data stores with the rapid mainstream adoption of technologies such as Apache Hadoop, Apache Spark and other modern big data platforms, designed for storing and analyzing tens to hundreds of billions of rows of structured and unstructured data. One of the most popular expressions of this trend is the "data lake' -- a store everything approach to big data. In a data lake, data is not classified when stored because its value is initially unknown. (www.techopedia.com)

At the same time, emerging real-time use cases such as the internet-of-things (IoT) and predictive analytics has driven the rise of real-time stream processing platforms such as Apache Kafka and Apache Storm. These technologies have enabled organizations to practically and economically store and analyze observational data such as IoT events and advertising and technology interactions using machine learning, text analytics, and natural language process. 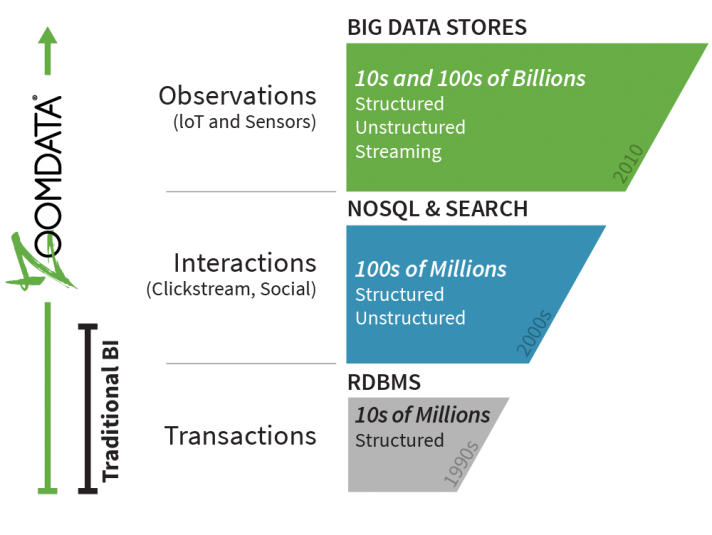 Robust enough for data scientists and business analysts, Zoomdata can empower knowledge workers with big data analytics at every level of an organization.